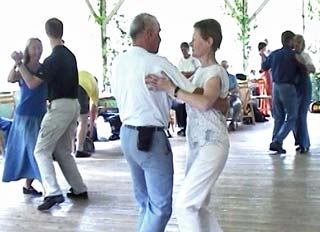 The waltz music has a range of variation. Some examples are wiener-waltz, modern waltz, scampered waltz and the type of waltz that 'Brunkullans waltz' represents - a smooth waltz with plenty of long tones.

Only waltz variants that are suited for dance to the traditional Swedish 'gammaldans' music are however covered at this page.

Among all the different types of Swedish 'gammaldans' dances, it took us the longest time to find methods to freely vary the waltz.

At first some of the basic waltz dance steps will be introduced.. As in all dances we mostly combine many of these steps during the same dance.

In the Swedish language the word for waltz is also used for a roll. So in Sweden we have help of the language when learning waltz. A roll is something that is rotating around itself, and so we do when dancing waltz. The couple turns clockwise and counter-clockwise, while at the same time moving at a constant speed counter-clockwise around the floor.

The movement around the floor is maintained by taking a step on the first beat of each bar. The steps are taken alternately forwards and backwards. As the couple at the same time turns approximately half a turn for each bar, the movement will be approximately along a straight line. The course along the floor is maintained by adjusting the turning speed. When turning clockwise, a slower rotating speed will result in a turn left towards the centre of the floor, a faster speed will result in a turn right. When turning counter-clockwise the situation is reversed.

The dance will be much more enjoyable if the floor is smooth and you have shoes with a leather sole that easily can slide on the floor. A major part of the rotation is thus maintained by turning on the soles, rather than by stepping. The steps are thus mainly taken forwards and backwards, and in between you turn mainly on the soles.

The follower takes her steps in the opposite direction to the leader, that is when the leader dances forwards the follower dances backwards. The dance runs smoother if you dance close to each other and, take your step forwards between your partner's legs.

When changing the turning direction, stop rotating and start rotating in the other direction, and at the same time take the following step on beat one in the same direction as the preceding (forwards/forwards or backwards/backwards).

One method to start practising waltz is to first just take the steps on your own forwards and backwards without rotation. When this works start rotating with a slow but constant speed. After some time the rotation speed can be increased to a half turn per bar.

When starting a clockwise turn forwards, begin to take a step with the right leg forwards and to the right, at the left (out) side of your partner's right foot. On the second beat there is a movement of the weight forwards and a clockwise rotation, but at this beat there is no step. On the third beat step forwards to your left foot without interrupting the turn.

On the first beat of the next bar, step backwards and outwards on your right foot, and then lift your left foot. On the second beat continue the movement and turn, but take no new step. On the third beat step forwards to your left foot in the dancing direction.

The leader and the follower have thus their right legs and feet at the outer side of each other.

The body and the face should as far as possible be headed inwards, towards the partner.

When changing the turning direction, the position and hold is switched so the left side and leg is at the outer side of the partner. The steps are inverted.

These steps are also useful for dancing bugg to waltz music.

Segla is a variant from the Swedish west coast, which also can be practised in other dances than waltz. We have at two occasions visited instructions of the dance. This is our interpretation of the dance.

Segla is only danced counter-clockwise, and the feet are always crossed. The main difference with other dances is that it is dances slower than the beats in the music.

The hold is close with body contact, and with a little offset to the left.

The common waltz is mostly instructed to be danced with one step on each beat. By using very distinct steps combined with springy knees, a waltz with rapid pace can be expressed.

These steps can also be taken using small running steps, making the waltz look more like the mazurka.

By avoiding to use distinct steps, or even omitting one or both of the steps on beat 2 and 3 where the weight is moved to the other leg, the dance is getting more comfortable, smooth and flowing. An example of this when dancing counter-clockwise, is to step left long step, right assembly, left cross or assembly backwards, right-right-right (that is turning on just one foot).

If the music makes a "jump", mostly expressed as a short pause in the music, the feeling in the music can be expressed in the dance by a corresponding upwards movement in the knees and body.

Leader's turn under own arm

Numbers below have the syntax [bar]:[beat]. E.g. 8:1 translates to the first beat in bar eight in an ordinary 8 bars sequence.

When changing turning direction from left to right, the leader can make one or two counter-clockwise turns under own left arm, directly followed by starting turning clockwise together. 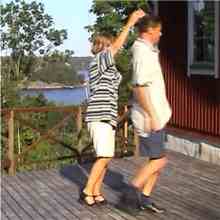 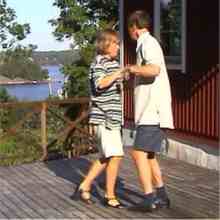 Follower´s turn under own arm

When changing rotation direction from clockwise to counter-clockwise, the follower can turn in the same manner one or two turns clockwise. The variant is lead either by using the left hand or by pressure with the right hand in the back. After the turn(s) the counter-clockwise waltz starts immediately. 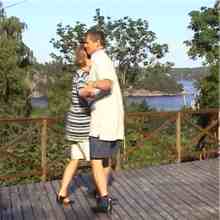 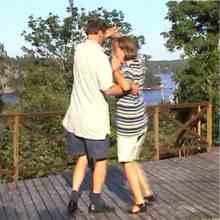 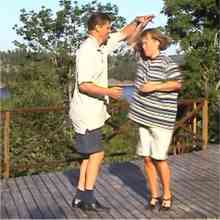 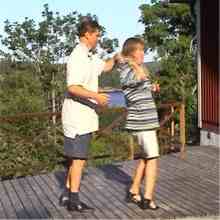 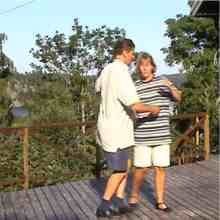 One and a half turn per bar

At the end of any eight bar sequence, the couple can make a half turn on each beat on bar 8 and eventually bar 7. On bar 1 the rotation direction changes. 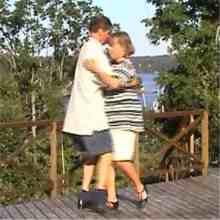 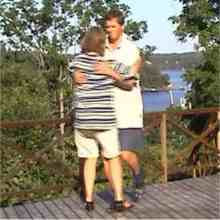 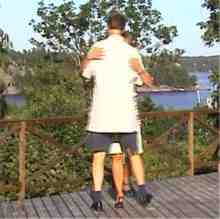 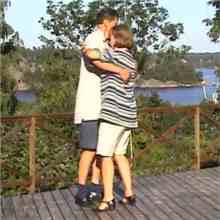 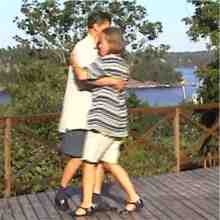 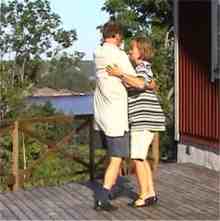 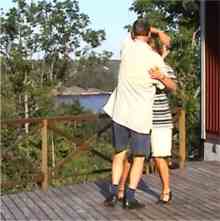 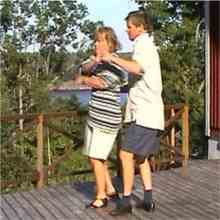 This variant has some of the character of the mazurka (hambo-polkett), although it is danced forwards/backwards. When turning counter-clockwise the leader stands slightly to the right of the follower (!), headed forwards and with the weight on the left foot. The dance starts on 1 with a little soft jump and a touch landing to the right of the follower, with the weight on both the feet On the second beat use a springy step forwards on the right foot. This is followed by a springy step on the left foot with a turn.

On the first beat in the next bar the leader jumps backwards, otherwise the steps are similar. Note that the jump is on a low level with movement in the dancing direction, not upwards. It is in other words an easy jump with some slide when landing.

Eventually the music can be accompanied by a light tap with the heels. Do not drown the music!

The dance is danced both clockwise and counter-clockwise. When changing rotation direction the leader also change side with the partner. It is sometimes a little difficult to find the steps again after the change of the turning direction.

The follower's steps can be the same as the leader's, but Ellika mostly use three springy steps, which also works fine.

This variant was created when Ellika and I danced one night in Orsa.

This variant we have learned on an instruction, although we have modified the beginning and the finishing off. The dance has one clockwise turn per bar, or in other words the double turning speed of normal waltz. On the first beat in the bar the leader makes a small jump around the partner and land on his left foot headed backwards. On the second beat the right foot is assembled with the left while contracting and turning, and on beat three take one step forwards and upwards to the right foot.

The follower's step is forwards on the right foot on the first beat, with springy knees, and the left foot backwards on beat three. Alternatively the follower can use the same steps as in sling ('slunga').

The dance was described to us with a resting sequence using a closed hold and walking steps, forwards for the leader and backwards for the follower.

We have omitted that and mostly prefer to go directly between normal waltz or other variants and this variant.

It is very important to dance close to each other with body contact, to achieve an easy and lithe dance. The character of the dance has some similarities with värmlandspolska and polka sling. 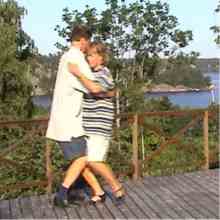 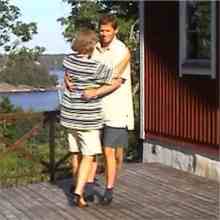 Waltz can be danced using the same patterns asin bugg.

The pace and characteristics of the waltz is of course not similar - the waltz uses triple-time beats, and it runs with a slower pace.

To overcome the three beats per bar challenge, the same steps as in bakmes/stigvals are used, with steps at beat one and three. 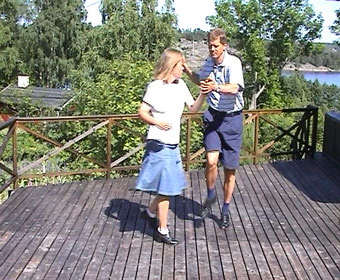 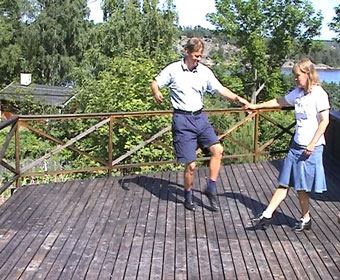 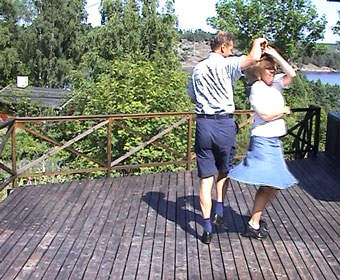 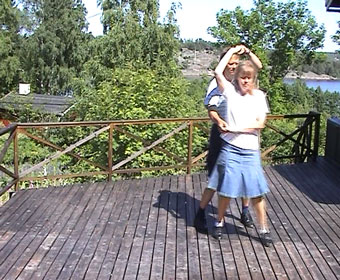 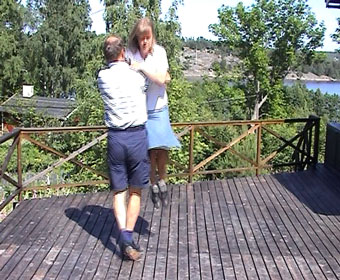 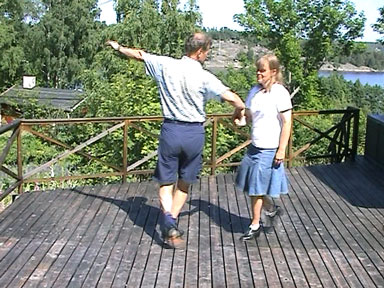 Waltz is also possible to dance in a knot. The principle is the same that has been described in the Schottishe section. A good position for starting this variant is to dance waltz clockwise, and in the last bar in a theme keep the leader's left hand in the follower's right, while the other hand is released. The follower then dance one turn clockwise.

This will bring the follower into a position to the the left of the leader, both headed forwards. The leader takes the follower's left hand in his right in front of the follower.

The turn is then danced counter-clockwise side by side, using the same rhythm as in bakmes, that is step on beat one and three, e.g. for eight bars.

When returning to normal waltz the leader releases the right hand, and with lead from the leader's left hand the follower dances one turn counter-clockwise into a normal waltz position.

At the end of this section there is a short video where a glimpse of the bugg is shown combined with the knot. 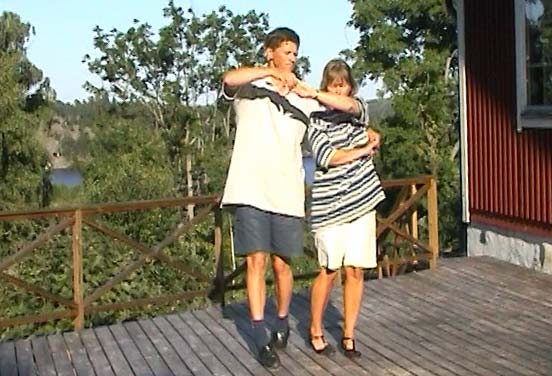 When there is space on the dance floor, it is possible to interrupt the waltz pattern and do some decorations.

As always, respect other dancers and do not try this if others are near behind you.

Attached is an example, that is also possible to practise in a similar manner e.g. in schottishe and foxtrot. 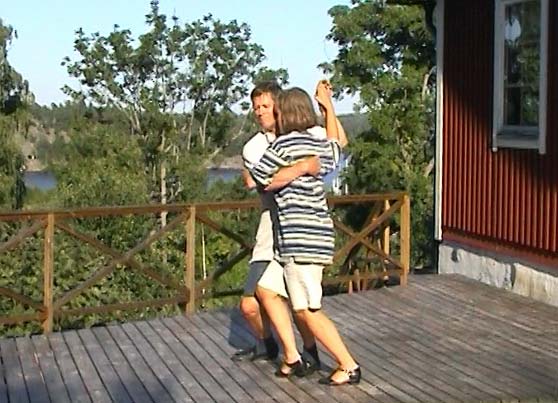