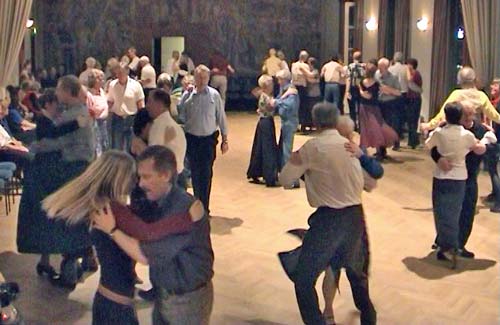 The dance characteristics of the snoa is smooth and gliding, or slightly springy.

The basic steps of snoa are very simple, but the dance requires good dancing techniques. The basic dance does not contain any variants.

However, as the music time is 4/4, many variants from the foxtrot can be used. In many cases the pace will however be slightly higher than in foxtrot.

The difference in the music between snoa and polka is sometimes small, and it is often possible to exchange variants between them.

The basic steps in snoa just contains walking steps side by side, and steps forwards and backwards when turning.

As the dance can be demanding, especially when the floor is rough, it might sometimes make it easer to maintain the turning speed by discreetly pushing with the right sole when turning on the left sole.

The turning becomes even easier if the steps are replaced by the Bingsjö turning steps. This is relaxing and perhaps sometimes needed if the turning is too sluggish.

It might also be nice to vary the snoa by changing from a smooth snoa to a smooth polka sling, where the feet only are partly assembled. 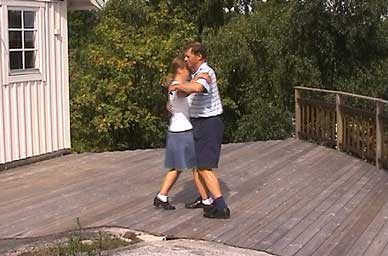 Snoa is a rather demanding dance, especially if the floor is rough and you do not use support from the right foot when turning. For this reason it is often not needed to vary the turn itself. A theoretically simple - but in practice difficult - variant is to dance snoa counter-clockwise. I prefer and always practice this keeping my left foot to the left of the follower´s right.

Dancing snoa counter-clockwise in a pleasant manner requires the couple to use an adopted posture and shape of the body in relation to each other.

See more about this issue in the chapter about Dancing Techniques.

When not turning in snoa, the normal behaviour is to just walk forwards. It is however nice to dance more actively also when not turning, and for this purpose the foxtrot steps and variants work well.

The turns can easily be resumed, e.g. by a turn under own arm for the leader or follower. Although most foxtrot variants can be used, I will here limit the description to just one, namely clockwise turn under own arm:

Make a normal foxtrot turn clockwise using six beats of the music. After these six beats you are back in the same position where you began. Repeat this once more, but add a turn clockwise for the follower around her own shoulder on the third beat, keeping the same rhythm.

This is a demanding variant, that preferably is initially practised using a very slow pace.

When the leader stands on his left foot during the bar where the spin will occur, he lets the follower make a quick spin clockwise while he takes his step towards his right foot. The closed snoa hold is then immediately resumed, and the snoa continues. The leader does thus not in any moment interrupt his own snoa, the hold is just opened up slightly for a moment, and then a slightly faster movement to immediately close again.

The follower spins on just one beat, and will need good support from the leader. The follower must get the right timing in the lead, and spin close to the leader, otherwise it will take too long time to close the hold so the next step can be danced smoothly.

Do not mix up this variant with a spin where the leader use two walking steps during the spin. That is much simpler, but is not what we aim for here.

Depending on how smoothly the variant can be danced, how much space there is on the floor, and the pace of the music, the variant can be repeated, e.g. on each 16th, 8th, 4th or second turn. We have at rare occasions, when the music has been very slow, also danced the spin on each turn.

Another simple and nice variant is that the leader quickly turns round and into a closed foxtrot hold, while continuing his own steps backwards. It is easy to resume the snoa turns from this position.

For those aiming for a more energetic snoa, the ordinary snoa can be alternated with a quicker turn. The easiest way to do this is to take three steps using the same time as normally is consumed by two. This is done by using the rhythm quick, quick, slow, turning one and a half turn on two beats. This leads to that the next three steps will be danced with the opposite feet on the first beat, and thus that it is preferable to use an even number of steps before resuming the normal snoa.

If however the music itself does contain broken bars as is often the case with music from Roslagen, it will be possible to follow the bars with this technique.

As the snoa will be rather fast with these quick turns, it is perhaps enough to dance this variant e.g. for 8 bars before resuming normal snoa turns. 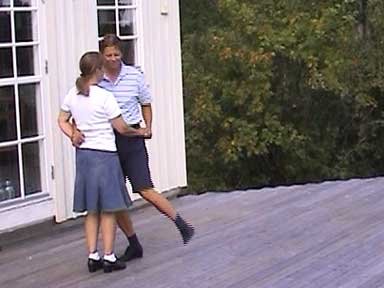 The video above contains a basic instruction for how to dance Polka and Polkett.

Polka can be played with many different speeds. When the polka music is slow an obvious alternative is to dance snoa. As that has been covered above, I here concentrate on the more speedy variant of polka or polkett. Quick polkas are in my opinion nice to dance actively.

The variants are mostly free combinations of some common polka variants. For those not knowing about them, I give here a brief description.

The enclosed video below contains a typical example.

The walking steps are useful in most dances. In the quick polka it is possible to vary the walking step by pushing forwards on the first beat, letting the knees and hips lead the movement, and then retarding with some slide on the outer sole.

On the second beat take a step on the inner foot while letting the hips move backwards. The hips are thus moving forwards and backwards

The variant can be ended with walking steps counter-clockwise ending up in a hurra around each other if this can be done without interfering with other dancers.

Hurra counter-clockwise: Danced around each other without movement on the dance floor. Both the leader and the follower place the right foot behind the left just before the beat, and the left foot towards and to the right of each other on the beats.

In dances where hurra is not normally danced, the middle of the dancing floor can sometimes allow for this without disturbing others.

The hurra can easily lead into the Polka from Kall. The feeling is that from dancing around each other, the dance get's a direction and a movement on the floor.

Polka from Kall is danced in a similar way as bakmes from Kall, but in polka tempo, turning counter-clockwise one turn for each two bars

This dance combines snoa and polka. The dance is a compromise between druff polka and snoa, in terms of power and rotation.

Each other bar is danced as druff polka or polkett with a half turn, each other as snoa with one turn.

It does not matter if the dance is started with snoa or polka, but it might help for the leader to know and remember which to start with - especially when changing turning direction.

The dance is thus danced both clockwise and counter-clockwise.

The rhythm is 'one and two' - druff polka a half turn - one two - snoa one turn. I have later heard that the variant also goes under the name Gruvslunga (minor's sling).

An old variant is to dance a gallop with the left side or the right side in the dancing direction.

This dance I learned from a Finnish girl on Skansen many years ago. She told me that the characteristics of the dance should be like a 'gutta-perka ball', that is a ball that when hitting the ground immediately jumps away with energy.

The dance should thus mainly be above the ground and when landing on the toes feather immediately away again. The dance has some similarities with the hambopolkett variant of mazurka, but is danced in quick polka rhythm.

The dance is very light and airy, which is not the same as comfortable. The starting point is a landing on both feet at the same time with the side in the dancing direction with the weight on the front foot, on beat 1.

The follower has her back towards the centre, the leader his back against the wall. On beat two the leader will land on his right foot in the clockwise turn, the follower on her left. On the next beat land on the opposite foot.

Köra is danced with three footsteps per complete turn, using one and a half bar. Thus the dance is slower and less demanding compared with snoa.

A variant of this that we invented and sometimes practise is to use the Orepolska step instead. The modification compared to Köra is minor - replace the solid foot-step on beat two with an 'almost' foot tap. That is, do not really touch the floor, but almost. When doing this, keep the right foot tight to the left.

Leader: On beat 1 take a step forwards to the left foot with some turn. On the second beat the turn is completed, almost a whole turn clockwise on the sole, ending with putting down the heel at the end of the turn, with the direction more or less forwards. On the first beat in the next bar take a step forwards on the right foot.

One turn takes thus one and a half bar, leading to that the starting position in the turn will not always be on the first beat in bar. The dance is thus slower and less demanding than snoa.

The video below shows the ordinary Köra, without the Ore polska step. 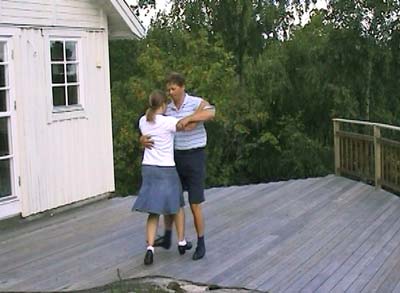 With the slunga step the normal step from left to right foot when turning is replaced by a small jump, so both feet are landing more or less at the same time with the back in the dancing direction. The step is the same for the leader and the follower.