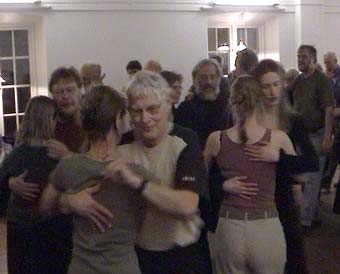 Polskor, like other traditional dances, have likely been danced using different styles and steps over time. While each type of polska has it's own characteristics, as always in social dancing there is a range of variation of how different dancers have adopted the dances.

For this reason the most accurate way of naming polskor is probably to use the place where it comes from as an attribute - Polska from ...

The descriptions below is our own contribution to this variation, and explains how we prefer to dance and vary some polskor.

We neither can nor want to claim that these descriptions explain how the dances traditionally have been danced.

The Bingsjöpolska melodies are mostly smooth. For this reason we prefer to aim for a floating feeling in the dance, using as insensible steps as possible.

When I was a beginner and joining a course in gammaldans, I was told that in Bingsjöpolska a low, steady carriage similar to a gorilla was preferable, using bended knees, with both feet staying on the floor as long as possible, keeping an exceedingly good balance

According to my own experience, it is difficult to achieve this without already having started the turn at the first beat in the bar, and turning on the right foot on the third beat.

I prefer to have my left arm over the right arm of the lady and stay on a small distance from the lady, in a position that allows a smooth, imperceptible transition between ordinary Bingsjö-polska and the enben (one leg) polska.

In the springpolska (repose variant) I prefer to dance with my steps to the left of the lady, using a substantial forwards movement. The reason to this is that I want to keep the same transportation speed as those dancing polska or enben around me.

I came in touch with this polska in my early dancing experience, although later than the Bingsjöpolska. At that time it was emphasised that this polska - similar to the Bingsjö polska - has smooth melodies, and that the dance preferably should reflect this.

If the couple between the third and the first beat turn on the right soles, and at the same time move their left hips and feet inwards towards each other, the momentum needed for the swing builds up. The step with the left foot consequently is taken inwards towards the centre, and not to the side.

In the wide turn this movement is combined with arms as straight as an arrow, as long as possible and with very relaxed shoulders, allowing the shoulders and heads to be at maximum distance from each other.

This requires a lot of space and a trust that the feet will not slip towards the centre (which they according to my experience never do).

It is utmost important to verify that there is enough room for the wide turn, as the forces are significant and the heads are in danger if a collision occurs.

Although the Bodapolska is very different from hambo, the steps are similar enough to have caused me problems. When being familiar with hambo and hearing the instructions of Bodapolska, it might be difficult to freeing from the influence of hambo.

The initial reaction to that advice was to stop turning on the foot whilst the body of course continued it's turn, something that the right knee did not tolerate. It took me a rather long time to find the rather obvious solution to this problem.

If the couple has not more or less completed the turn before the third beat, this might cause similar problems as in the Orsapolska. There will be a gyro effect that stabilises the couple and as a result the step on the third beat can not easily be taken in the dancing direction. In contrast to many other dances, I feel that as a leader it is difficult to help the follower with this turn. If she has not completed her turn or have done so with her weight backwards, the leader must pull the lady to be able to take a step backwards, something that not follower nor the leader appreciate.

Bodapolska is a demanding polska that requires good balance. When it works it is a marvellous dance, that also can be danced closely.

The video below show how we these daus use to dance the Bodapolska, including the one-leg variant of the same dance.

Our interpretation of Orsapolska seems not always to be appreciated by the instructors we have met. But this polska we love and is our absolute favourite, so we have decided to dance the polska in the way we prefer.

As with the Bodapolska, our way to dance this dance has evolved for a long time, and we do definitively not consider this to be an easy polska. It was at the instructions in the rural community centre in Orsa that we began to explore the dance. The starting point for us was to learn that the leader must in all situations completely avoid to curtsy on his right knee, and on the third beat take a reasonably long step with the right foot diagonally backwards.

For the leader, it is more difficult than it sounds to avoid to curtsy. The reason to this is likely that the follower takes a step backwards towards her left heel and at the same time bends backwards. It is of course a risk that this movement can lead to lack of equilibrium. By bending the right knee it is possible to balance the couple and achieve resistance. However we feel that this resistance spoils the nature of and the joy of the polska.

All good things are three. The third element in this polska that made the dance, was to use a very close embrace. With a close embrace it will be possible to turn very smooth and lithe turn between the third and the first beat. According to our opinion a prerequisite for the delightful weighing in the dance is that the lady can take her step almost straight-line backwards on the first beat.

On the third beat the turn is almost completed if the first two steps worked well. Instead this step is mainly done backwards and upwards. It is this movement upwards that creates the double wave in the dance.

If the turn has not taken the lady into a backwards position, there will be a gyro effect caused by the rotation giving a stability that in this case is not wanted, preventing the balancing forwards/backwards in the polska.

Another positive effect of a close embrace is that the couple only can move as a single entity.

We have met instructors who not recommend the leader to move forwards when the lady takes her step backwards, as the lady then can get a very uncomfortable feeling of falling backwards. If this is out of control it is very unpleasant, as she has small possibilities to protect herself. The leader can however control this situation, as he will regain the balance when his left foot hits the ground. It requires however that the couple are perfectly-matched dancing partners, so the moment of unbalance is just as much that it is enjoyable and the lady is confident with the situation.

Our opinion is that the momentary feeling of unbalance is the most enjoyable element in this polska. For the movement to be enjoyable, it is needed for the couple to make the turn between the third and the first beat quickly, so the turn is almost completed before the lady take her step backwards.

The described manner to dance Orsapolska is not very easy, it requires good balance and co-operation within the dancing couple. Quite often it is necessary to dance for a while before the dance will feel balanced, smooth and harmonic.

The video below shows our own style in the Orsapolska.

Hambo, Bodapolska and Orsapolska all use similar steps, at least for the leader. The pictures below shows our position at the first second and third beat in these dances.

Fairly soon we found a solution we liked. We have however unfortunately later compromised about that. Note that our solution not follows the written instructions for the polska, as I as a leader take my left foot of the ground already on the second beat.

The problem that made me frustrated in the beginning was that if I lift my left foot on the second beat, I had no force to lead the turn. This will very often result in a too short turn, making the couple to dance inwards towards the centre of the room.

There is an obvious solution, to let the left foot stay on the ground and lead the turn as in Bingsjöpolska. This was however not what I was aiming for.

The trick that took me over this frustration was to lift the left foot, holding the foot and the leg out a little to the left. This gives the couple a higher turning momentum leading to that the lady feels some resistance.

When the lady overwins this resistance it creates a turning momentum that the leader can reuse before the first beat by moving his left leg and foot inwards towards the centre, and in this way keep turning as long as needed to keep the line on the dance floor. It is important that the follower before that, on the third beat, overcomes the resistance and gives the couple the momentum needed.

This way to dance gives a little twitch within the couple that perfectly match the music. I have however encountered that instructors have other ideas about how the dance shall be danced, and this has resulted in that the method described above is somewhat disguised by moderating how much the left foot and leg is held out. This leads to that the polska comes closer to the instructed version, but leads unfortunately also to that the nice twitch is lost.