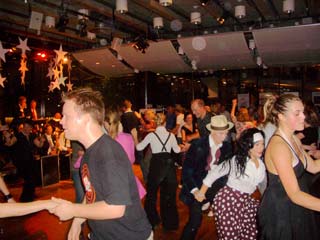 When I started to visit public dances and especially the GDV dance events, I came early in contact with foxtrot and other modern dances. If you want to learn just one dance, I believe foxtrot is the best choice. I feel that foxtrot should be included in the all-round education, and that consequently the dance should be taught at the intermediate stage of the compulsory school.

The description below refers to the common foxtrot, and should not be mistaken for the slow foxtrot. Slow foxtrot is one of the most demanding competition dances, and has a style and steps that, despite the name, is more agile than the common foxtrot.

The music in foxtrot use a 4/4 rate. The steps are in the rhythm slow, slow, quick, quick, where the slow steps use 2 beats and the quick steps one. This means that one step sequence use one and a half bar. For this reason it does not matter if the dance is started when the bar begins or in the middle of it.

The basic step is directed in a 45 degrees angle against the dancing direction, At the quick steps the couple turns 90 degrees and take the next steps in the other direction (backwards if starting forwards).

The couple will thus move in a small zigzag pattern counter-clockwise along the dancing floor.

The basic dance usually also includes turns clockwise and counter-clockwise, as illustrated on the video below.

Foxtrot is a dance that is easy to vary. Although the basic step is slow, slow, quick, quick, it works just as well to take steps on each beat.

It is also easy to go back to the basic steps as it can be done both at the beginning of and the middle of each bar.

This can be used to express the music in the dance.

Many variations are transferable between gammaldans as schottische and polka, foxtrot and bugg, and also in some cases tango. Thus some variations described for other dances also are used in this dance.

The attached video shows how we use to dance foxtrot.

Strictly speaking swing is not just one dance, in this context it is used as a joint expression for jive, Lindy Hop (jitterbug) and Boogie Woogie.

The first of these three dances we came in touch with was jive. We participated in a series of courses at Mälarsalen, ending in 1992.

We feel that rock'n roll music from the 50's at a high pace does the jive dance most justice - the fitness might be stretched. 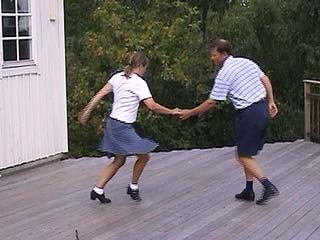 Later we participated in a succession of Lindy Hop courses at Swedish Swing Society. When we joined those in the spring 1998, the dance was often called jitterbug. It was at that time we started to use the term swing. The reason was that although Lindy has a slightly different style compared with jive, we felt that it is more that unites than differentiates these dances.

As an example, the most common basic step - chasse step left (left quick, right quick, left slow) with some syncopation)) chasse step right with syncopation, and then step backwards/forwards (slow/slow) - is used similarly in both the dances.

Also some of the variants we had earlier learned in jive were directly transferable and commonly used in Lindy Hop as well. But there were differences as well - in Lindy swing outs using eight beats are frequently used, while turns using six beats are perhaps slightly less frequent.

With our previous experiences, we thought that this was the other way round from what we had met in jive - variants using six beats were common while variants using eight beats (e.g. whip) were slightly less frequent.

The typical dance music also distinguished the dances - in Lindy mostly jazz music was used, with a widely spread pace - both slow and rather rapid music was used. But again, the difference was not bigger than that we without problems could practise both the dances with the same music.

At SSS we also practised to vary the basic steps - the three chasse steps can e.g. be replaced by using just one or two steps. On the whole, we were encouraged to vary steps, sequences and variants.

Of the three swing dances we have met so far, the Boogie Woogie is the dance we last came in touch with. We joined a sequence of courses at Ebba Dansklubb, starting in the spring 2002. At these courses we had to reconsider most of what we earlier had learnt. Although the basic step also is used in Boogie Woogie, it is not executed in the same way.

Among what is left in our minds after these courses is to work on getting a proper "bounce", that backwards step instead mostly is headed forwards, that the leader makes way for the follower, that the couple should keep it's line all the time (e.g. after a swing out the couple should be headed in the same direction as before).

It is fascinating to watch good Boogie Woogie dancers, the masters of the basic steps are perhaps found in this dance. But for us, what we learned from Boogie Woogie has not made any heavy footprints in our dance.

Íf the reason for this is that we last came in touch with the dance, we can't say.

Despite that we felt that there are many differences between Boogie Woogie and the other swing dances, we still think that it is a lot that unites this dance with jive and Lindy. Many steps and variants are found in Boogie Woogie as well, although often exercised differently.

Swing dance is our style

When we dance swing we often differentiate which of the dances we dance, but in practise we mostly mix them. For this reason we feel that swing is the best term for our way to dance.

The video below shows how it might look when we dance to swing music. In this case the dance mainly contains jive variants. The reason is that the music, that just contains a Boogie Woogie chord I put together to avoid using non free music here, ends when we are in the process of changing to Lindy Hop. 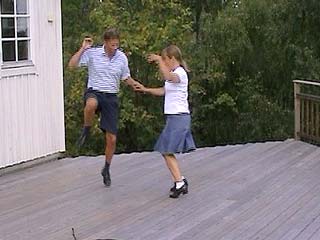