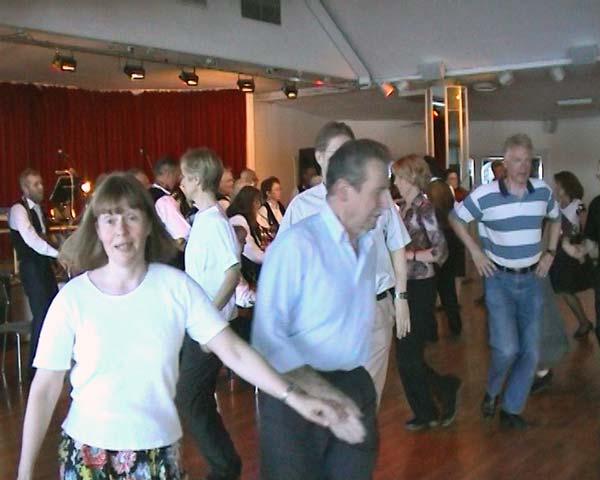 In Sweden the mazurka is often danced as two different dances. At the first melody most persons practice a dance similar to hambopolkett. I do not know if there is a proper translation, so I have here called it Swedish mazurka.

To the second melody, `skånsk´ mazurka is mostly danced, a dance with dalsteg as in hambo, then two turns outwards from each other with mazurka kicks, two bars with mazurka kicks forwards and then one turn together clockwise.

As no other gammaldans, the Swedish mazurka feeds mixed feelings. Some do not like it at all, while others, like myself, like it a lot. If the little lift/jump to the first beat in the bar is omitted, the dance becomes very similar to, or can be replaced with, hambopolkett.

Some appreciate the hambopolkett very much for it's elastic and relaxed characteristics. That dance has some nicknames which might help adopting the right feeling and style - "gubbstöt" (old man´s bump), or rumpedarra (shivering rump).

The mazurka music has as waltz and polskor three beats per bar, and hambopolkett is danced with one step per beat. The difference compared with waltz is that in the hambopolkett the step on beat one, that is used to move around the floor, is taken with the side in the dancing direction. In waltz the corresponding step is taken forwards and backwards.

The mazurka music is relatively quick and springy, and it feels natural to express this with the help of the knees. If at the same time the shoulders and body is kept relaxed the feeling in the dance is quite nice, and the nicknames gubbstöt and rumpedarra get a meaning.

To change a hambopolkett to a mazurka a small jump is added from beat three to beat one, with a landing on both feet. It is however then important to keep the weight on the front foot, to allow the back foot to immediately be moved - if in doubt, compare with hambopolkett.

The step has similarities with my understanding of the Finnish polka.

A short instruction video can be found below.

This is the one and only gammaldans that I mostly dance in a similar pattern. This pattern contains a mixture of common Swedish mazurka or hambopolkett, rimppa in three variants, koskit (cow shit) in two variants, a type of polska in two variants, and - if the music lasts - rimppa in two more variants. As I have never seen anyone else practice this dance, I have decided to give it my own name.

After that one sequence with rimppa follows, side by side, however with the leader´s left hand holding the follower´s right in front of the couple

The rimppa becomes more enjoyable if it is danced with brisk energy, with distinct jumps, kicks and movement forwards.

At the eighth bar the follower dance one turn counter-clockwise under the leader's arm. This is then followed by eight bars of waltz clockwise. At the end of these eight bars a position side by side for rimppa is once again established, but this time with a one-sided low handheld.

The next sequence of sixteen bars is similar to the previous. However at bar seven the follower starts a double turn clockwise under the leader's arm, while the leader makes a half turn in front of the follower. This leads immediately to a hambo-polkett-mazurka counter-clockwise.

The leader has limited possibilities to help as he has just one hand for the lead.

The third rimppa sequence of sixteen bars is similar to the previous. The difference is that the leader starts it with his back in the dancing direction.

This makes the movement and lead when changing places even more distinct, as the turn for the leader is longer.

After this sixteen bars is used with the koskit (cow shit) variant, twice clockwise and twice counter-clockwise. (Koskit: two (skånsk) mazurka steps forwards in the dancing direction, then two turns by the couple clockwise using the same steps).

At this stage some polska steps are used. The entrance to the polska uses however two more mazurka steps forwards. The polska has similarities with rundpolska, but where the leader at the third beat slides in the dancing direction on his right sole, ending with a slight rise. This leads to a more active and enjoyable polska.

After eight bars the polska is altered to a polska using the style of the Värmlandspolska - the leader makes a slight jump to beat one, landing more or less on both his feet with his back in the dancing direction and with some contraction.

So far this dance variant has consumed 16 bars hambopolkett, 3 x 16 bars rimppa, 16 bars koskit and 16 bars polska. Many melodies will not last longer, and if so it is time to breath before the "skånska" mazurka. But if the music will last, be prepared for the two last variants - the stumbling ones...

These are in principle rimppa variants as the above described, with the leader headed forwards as usually, but with the follower in a closed position headed backwards.

This variant easily gives aching toes if anyone in the couple starts on the wrong foot. Start out easy until you are sure that you will not hit your partner with the mazurka kicks. It is more or less normal that it takes some time before the variant works smoothly.

Skånsk mazurka is danced in four tours using two bars per tour, or eight bars together.

The dance starts with an open single hand held.

Skånsk mazurka can easily be varied. I here present variants in an order that I rather often use with a partner that I have not danced with before.

A good start might be to dance traditional skånsk mazurka for 16 bars or so, until the dancing couple is acquainted to each other.

The video below is an example a free variation of Skånsk mazurka.

This variant can mostly be lead also with a partner you dance with the first time, and thus can serve as suitable introduction to new and exciting variants. Start by dance the first two beats as normally, with two dalsteg.

At the two turns outwards, the follower makes her normal turns while the leader takes his mazurka steps forwards, letting the follower turn under his arm.

Bar 5 and 6 the leader turns outwards while the follower takes her mazurka steps forwards. The remaining two bars are used for the turn together as in skånsk mazurka.

As the follower takes all her steps as in skånsk mazurka, the only new for her is that the leader not uses the normal sequence.

Depending on how fast the follower adopts, the variant can either be repeated or changed. If dancing with a person who has not danced the variant before, I might warn the first time by saying something like "and now altering". Generally I try to avoid leading by voice, but the first time a variant is danced a little warning might help.

Describing this variant has caused me big trouble. I know how to dance it, but to describe it is another matter. As I feel that I cannot understand the description yet myself, I am not prepared to publish it.

Update: A description does now exist in the Swedish subsite, but I have not as yet translated it. You can find the Swedish description here.. I have however copied the pictures and video to this page as well:

Dancing out from reversed position

This is dependent on the preceding description, so we will have to wait on that one as well.

On the second dalsteg the leader leads the follower so she takes her steps in front of the leader headed towards him.

On the third bar the couple starts turning counter-clockwise with the leader dancing to the right of the follower using mazurka steps ("frykdal steps"). The turn is danced using two bars for each turn until bar 8.

In this variant there is no contact between the leader and the follower for four bars. That makes it almost impossible to lead if the follower does not recognize the variant.

For this reason I mostly give a verbal instruction when dancing the variant with someone for the first time, e.g. I say "four turns" during the second dalsteg. As soon as the follower recognises the clapping that is no longer needed.

The variant is danced using the normal dalsteg for two bars. Then both the leader and the follower makes four turns outwards from each other with mazurka ("frykdal") steps. This is accompanied with loud hand claps on beat two and three on all the four bars.

The variant is ended as in normal mazurka.

During the first two bars the normal dalsteg are danced. On the third bar the follower turns under the leader's arm, while the leader take mazurka (frykdal) steps forwards.

On the fourth bar the follower continues to turn, while the leader with his left hand catch the follower's right when it passes him.

This will lead to that the turn will be blocked when the couple are headed backwards in a knot, with the leader's left arm behind the follower's back, holding the followers right hand that she has in front of her.

During bar 8 the turn is continued, so the leader comes to a position to the left of the follower, both headed forwards, with the leader's left hand holding the follower's right behind the couple.

To show the follower the position and direction, the leader offer's his right arm, and the follower place her left hand in the bend.

It is not unusual that a follower that is not used to this variant miss the last part of the turn and ends with the back in the dancing direction. The leading of the last part of the turn is a little tricky, as it is difficult to reach long enough, having the arm behind his own back. By turning close to each other the arm length might suffice. The lead has also to be done using the own body to show the follower that after the turn the movement direction will be forwards.

From this position it is perhaps nice to dance eight bars plain skånsk mazurka.

After the two bars with dalsteg the follower turns under the leader´s right hand for bars 3,4,5,6. The leader meanwhile dances mazurka (frykdal) steps. During bar 7 and 8 the follower continues to turn, while the leader moves around her one turn.

During the next eight bars the leader turns 8 times under his own arm, while the follower makes two dalsteg, four bars frykdal steps and two bars tramping. During bars 7 and 8 the leader will make two turns around own shoulder, and at the same time one turn around the follower.

In this position the next two bars are danced using frykdal steps.