Dancing experience: Örjan has been dancing regularly since 1975, Ellika since 1980

We have both our source in the Swedish gammaldans and the GDV mix (Gammaldansens Vänner / Gammaldansens Friends), where also foxtrot and the Swedish bugg was and is common. Later on the repertoire has been enhanced with other dances, such as polskor, swing dances, and also at times a little of salsa and tango.

The purpose of the site is to convey the joy of dance to others.

Described experiences do perhaps not always agree with yours? If so, let the differences amuse you, not provoke you.

During several years of dancing, often with several -mostly public- dance events per week, many dance variants have been adopted or developed. Some of these variants are not very common.

The source is mostly unclear - sometimes the variants have been picked up from instructions long ago, in other cases a variant has been created during an enjoyable dance evening. Often a dance variant is created one evening, and forgotten the next. The ambition with this site is to share some of these experiences.

A question I have sometimes asked myself is how so much time in life can be spent with just dancing - one evening after the other doing the same thing, without getting bored. My answer is that the dance gives so much back - social life and friends, joy of movement, and a great musical experience.

By encouraging the following aspects, the dance can remain enjoyable for a lifetime:

By way of introduction there is a dancing calendar containing public dance events, concentrated to the Stockholm region This is supplemented by dance reports from some of the events. Then follows chapters describing dancing styles, dancing techniques and improvised dance.

The next sections contain some detailed descriptions of variants useful in improvised dance. Also some common variants are described. The variants can be combined to a web, freely composed to express the inspiration encountered in the music and the environment.

There might be many source to errors in the dance descriptions. It is not easy to transfer a knowledge that only exists in the spinal marrow to a text. If it is difficult to understand a described dance variant, a possible reason is that the description is unclear or wrong. If so, please do not hesitate to send a note through e-mail.

So far there are hardly any descriptions of the basic steps of the traditional dances on the site. The ambition has rather been to describe the own dancing experiences. The ambition has not been to express what is right or wrong in the dance - but rather to encourage spontaneity and the enjoy of dance out on the dance floors. I hope to see you there!

After serveral years dansglad.se sections for outdoor activites and dog ownership were added. Although they should have been placed on separate sites, for practical and economic reasons they instead were added to this site.

The outdoor section contains a walking guide for walks in the Stockholm surroundings, containing descriptions and maps for about fifty walks that I often have used. These are complemented by many reports from these walks. The disposition has been inspired by walking guides for Madeira, Teneriffa and Gran Canaria that we have used many times and found very useful.

Experiences from mountain walks in Sweden and Norway are also included, with discussions and a suggested detailed list of equipment, and also a description of one of my favorites - a one week walk through Sarek. 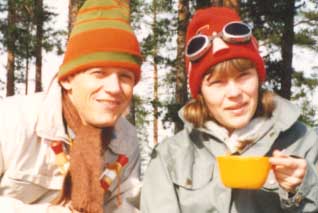 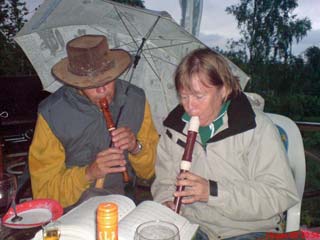 The video was recorded 2001, and is an extract from my first video recording of dance. It was included as extra material with my first video Tre Öar, and has also been used for many of the illustrations in the dance instruction section. The dance is improvised, there was no preparation or plan for what to dance.

Full screen mode is recommended when viewing the video.